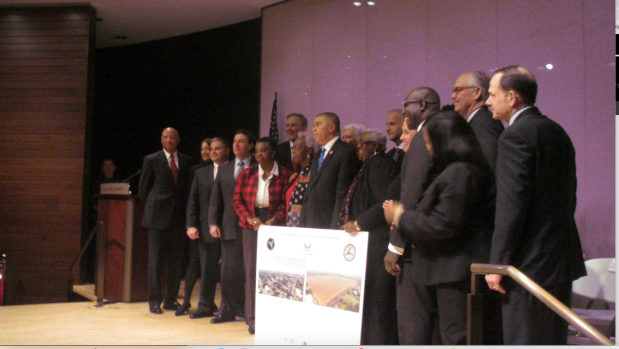 Assistant U.S. Attorney Hal Goldsmith stayed on script Monday afternoon, responding tersely to questions posed by a gaggle of reporters during a news conference held on the sidewalk outside the Thomas Eagleton Federal Courthouse in downtown St. Louis.

“We are confident of our case,” Goldsmith said, referring to the three-count criminal indictment issued by the U.S. Justice Department against former St. Louis County Executive Steve Stenger. Following this vague answer, a veteran broadcast journalist turned aside and muttered to himself: “Great sound bite — six words.”

The dearth of prosecutorial verbosity and courthouse histrionics did not deter the assembled press, however, from relishing the proceedings in an amicable atmosphere akin to the camaraderie shared by farmers of bygone days who went to town to witness a hanging in the public square.

To commemorate the auspicious event, U.S. Marshals offered free notebooks and pens, but there were few takers. The journalists in attendance seemed satisfied to gloat rather than scribble. KMOV-TV hired a sketch artist for the occasion.

The only thing missing were picnic baskets.

After pleading not guilty to bribery, mail fraud and theft of honest services, Stenger was released on his own recognizance by Judge Noelle  C. Collins. Celebrated defense attorney Scott Rosenblum represented Stenger during the arraignment.

The second term Democrat resigned from public office Monday morning following the release of the indictments. He had won reelection in November but continued to be dogged by allegations of corruption involving favors granted to campaign contributors, including businessman John Rallo. The scandal, which played out in the pages of the St. Louis Post-Dispatch and before the St. Louis County Council over the course of the last year, centered on the actions of Stenger underling Shelia Sweeney, CEO of the St. Louis Economic Development Partnership.

Five Post-Dispatch reporters contributed to the story today. A pack of TV and radio reporters were also present.

One of the many questions not asked of Goldsmith at his sidewalk press conference was whether federal investigators are probing the contract between the St. Louis Economic Development Partnership and Kit Bond Strategies, the lobbying firm of former U.S. Sen. Kit Bond and his wife.

In 2016 and 2017, the St. Louis Economic Development Partnership funneled $230,000 of public funds to Kit Bond Strategies, according to federal lobbying reports. Part of that total went to pay for the failed congressional effort to turn the West Lake Landfill Superfund Site over to the U.S. Army Corps of Engineers — an agency that expressed serious reservations about assuming the responsibility for taking control of the project in the first place. The exact amount spent specifically on the West Lake lobbying effort is uncertain. A request under the Missouri Sunshine Law for further details was denied last fall.  But this much is known:  the development agency’s contract called for KBS to be paid $10,000 a month for its services. The lobbying records show that the public money was doled out to the lobbyist in quarterly payments. The St. Louis Economic Development Partnership paid the lobbying firm an additional $60,000 in 2018 , but by then the effort to persuade Congress to turn the West Lake clean up over to the Corps had been dropped.

Note: Stenger pleaded guilty on May 3.