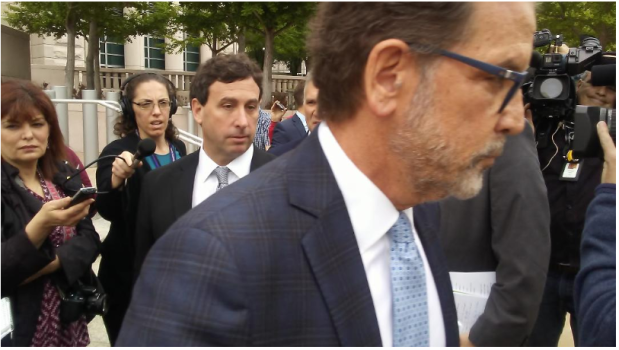 It was a scene out of a bad Hollywood movie. A crowd of reporters and cameramen are loitering outside the federal courthouse in a Midwestern city. Slowly the camera zooms in on the leading man, who appears to have dieted on Crispy-Creme donuts for the last six months to fit the role of a  disheveled, dogged newspaperman.

St. Louis Post-Dispatch columnist Tony Messenger (playing himself) wears a rumpled sport coat, with his shirttail hanging outside his pants, notebook and pen in hand.

His prey is his antithesis:  Steve Stenger, the once-wily politician, snared in a federal sting operation, appears dazed, but, nevertheless, dapperly dressed in a crisp, dark business suit.

Messenger:  “Are you cooperating with federal investigation?”

Moments later, Stenger and his attorney Scott Rosenblum do an abbreviated perp walk through the pack of journalists before jumping into a black SUV with tinted windows that pulls up on cue and whisks them away. It was all over in a minute or two.

The only part of the action on Friday morning that seemed unscripted was the appearance of a deranged woman in red, who wandered into the middle of the scene, aimed her smart phone camera at Stenger and Rosenblum and began screaming admonishments. “You’re guilty!” she yelled. “And I voted for you!” As Rosenblum quickly slammed the door of the luxury vehicle in her face, she added: “And you defended him!”

Assuming the interloper is a registered voter in St. Louis County and she went to the polls in November, she is correct on all three declarations. Earlier, Stenger had pleaded guilty to bribery, mail fraud and theft of honest services related to contracts given in return for campaign contributions between 2014 and 2018. Stenger’s guilty plea reversed the one he made only a few days before. Judge Catherine D. Perry set his sentencing date for Aug. 9.

While waiting for the judge to enter the courtroom, Assistant U.S. Attorney Hal Goldsmith smiled and appeared to look over at defense counsel Rosenblum and wink. Perhaps the prosecutor suffers from a nervous facial tick, or the two attorneys may have just been sharing a moment of professional adoration. But the question remains: What kind of deal did Stenger strike with the feds in exchange for his guilty plea?

Two individuals named in the indictments  —  former St. Louis Economic Development Partnership CEO Sheila Sweeney and businessman John Rallo — are alleged to have participated in the same criminal activities, but were not charged. 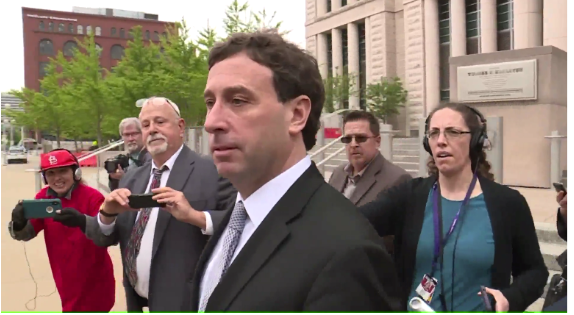 As former St. Louis County Exec Steve Stenger exited the federal courthouse on May 3, he was confronted by the woman in red who shrieked, “You’re guilty, and I voted for you!” Senior freelance blogger C.D. Stelzer is next to her. Behind Stenger on the right is Pulitzer-winning-columnist and GQ model Tony Messenger of the St. Louis Post-Dispatch. (photo credit: KTVI/Chris Hayes)