Gerhard J. Petzall, a former law partner of St. Louis Mayor Francis Slay, was a director of Spectrulite Consortium Inc., which owned and operated an Eastside plant contaminated with radioactive waste.  After the problem came to light, the company forced its union work force to strike, filed for bankruptcy, and then reorganized under a different name, selling half the business to a foreign conglomerate. 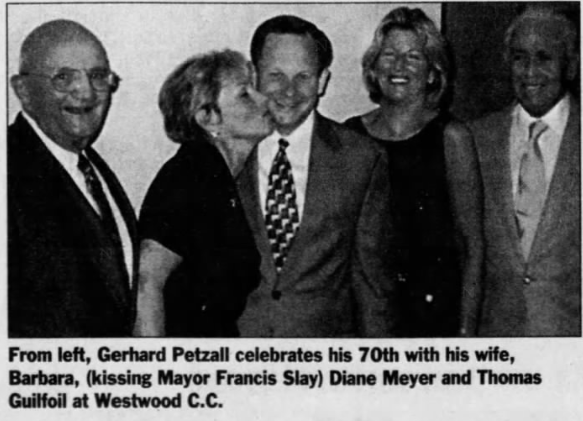 I collared outgoing St. Louis Mayor Francis Slay at the Earth Day celebration in Forest Park back in 2013 and asked him for a spot interview. He  told me then that he didn’t have time to go on camera for even a few minutes to talk about St. Louis’ longstanding radioactive waste problem.  He was too busy that sunny Sunday afternoon promoting some other well-intentioned environmental cause. It might have been recycling. As a result, the mayor does not appear in our documentary, The First Secret City.

But Richard Callow, the mayor’s longtime political consultant, does make a cameo appearance in the film. Aside from representing the mayor, Callow has also been a local spokesman for Republic Services, the giant waste disposal company that owns the radioactively-contaminated West Lake Landfill Superfund site in North St. Louis County. In that role, Callow has acted to tamp down public concerns about the severity of the environmental and health problems related to the troubled landfill.

Callow, however,  is not the only link between the mayor and the radioactive waste that has plagued the region since it first began piling up as a byproduct of Mallinkcrodt Chemical’s work on the Manhattan Project.

As it turns out,  Gerhard J. Petzall — the mayor’s former law partner — has past ties to the now-defunct Spectrulite Consortium Inc., a company that owned a plant  in Madison, Illinois contaminated with radioactive waste from the Cold War.  Missouri incorporation records  show that Gerhard J. Petzall, a senior partner in the politically-connected law firm of Guilfoil Petzall & Shoemake, sat on the board of directors of Spectrulite for years and continued  act as an attorney for the company until 2009.

By that time, Slay was in his second term as St. Louis mayor. Slay was a partner in Guilfoil Petzall & Shoemake for 20 years prior to becoming mayor. 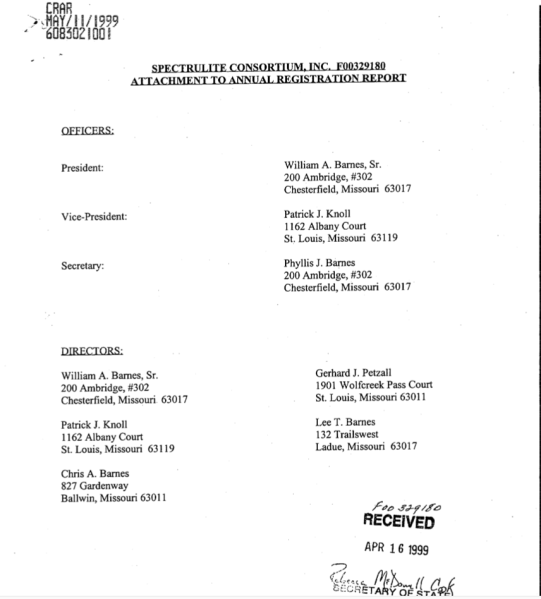 The problems at Spectrulite began in 1957 when the foundry was owned by Dow Chemical Co. Dow processed uranium at the plant between 1957 and 1961 under a subcontract with St. Louis-based Mallinckrodt Chemical Co., which was working for the U.S. Atomic Energy Commission (AEC). Dow’s work caused radioactive debris to accumulate on overhead girders — where it was ignored for decades. In 2000, the U.S. Army Corps of Engineers oversaw a partial radioactive cleanup at the Spectrulite plant.

The Department of Energy conducted the first radiological testing at the facility in March 1989, which showed elevated levels of Uranium-238 and Thorium-232. A story published in the St. Louis Post-Dispatch the previous month had spurred the government to do the testing. The story was based  in part on the earlier research of Kay Drey. In 1979, the St. Louis environmental activist had interviewed a terminally-ill truck driver who had delivered uranium ingots from Mallinckrodt Chemical in North St. Louis to the Dow plant in Madison. The truck driver attributed his lung cancer to his occupational exposure to radiation in the late 1950s and early 1960s.

The plant at Weaver and College streets operates today as Magnesium Elektron of North America, a non-union company and a subsidiary of Luxfur Group of Great Britain. After going bankrupt in 2003,  Spectrulite’s owners sold the company, but continue to hold a stake in the operation and the property itself.

Oddly enough, Spectrulite  remained an active corporation in Missouri — with Petzall’s name appearing in its annual reports long after the business had filed for bankruptcy in federal court in East St. Louis, Ill.  The records show that Petzall continued to be listed as a director of the corporation until 2003, and his name still appeared as a counsel for the by-then non-existent company until 2009.  Spectrulite never operated its manufacturing plant in Missouri. The plant was located across the river in Illinois. But the bankrupt, Illinois-based company, which had been sold to a foreign concern, remained an active corporation in Missouri for six years after its apparent demise; proof that there is life after death at least in the legal world. 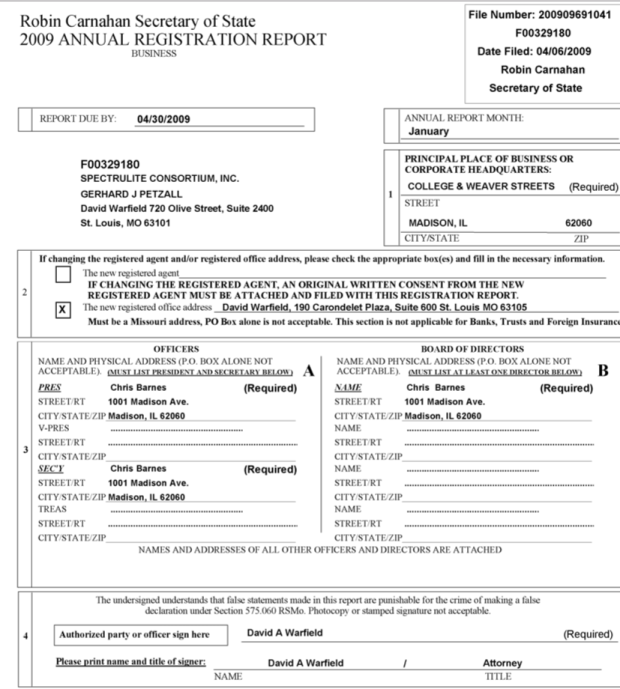