In retrospect, the 14-year-old missive seems to bear the tone of an old love letter. Stephen Mafood, the spurned lover and then-Director of the Missouri Department of Natural Resources, is essentially begging former EPA Region VII Director Dennis Grams for mercy.

For people who live in North St. Louis County, it’s like a sad ballad that everybody knows by heart. The plea by the state regulatory agency chief went unheeded.

On June 2000, Mahfood asked Grams to reconsider a recently published draft feasibility study that failed to to consider the removal of radioactive waste from the West Lake Landfill in Bridgeton, Mo. The materials were a byproduct of uranium processing carried out by Mallinckrodt Chemical works from 1942 until the mid 1960s.

“This approach seems to be inconsistent with the cleanup levels at other DOE sites across the nation,” wrote Mahfood. “The other radioactive sites in the St. Louis area are targeting cleanup goals several orders of magnitude more protective than what is being proposed to left at the West Lake landfill.”

Mahfood advocated “hot-spot” removal as an alternative, and asked the EPA to consider the recommendations of the St. Louis Remediation Task Force report.

Neither Mahfood or Grams still hold the respective positions that they did in 2000. A new generation of leadership has taken over, but everyone seems to be singing the same old song. 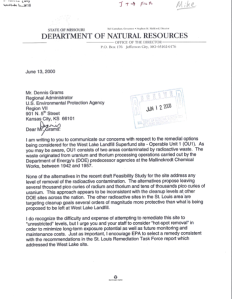 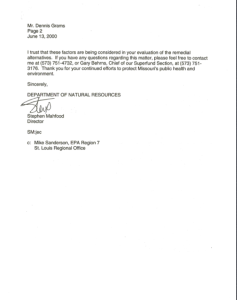