The St. Louis Post-Dispatch reporters who nailed County Exec Steve Stenger turned a blind eye to the historic influence of organized crime that presaged their reportage. 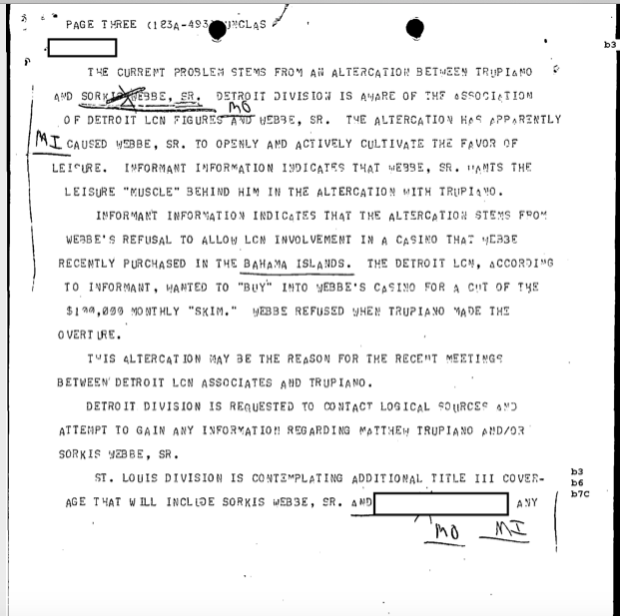 In 2014, Webbe introduced then-County Executive Stenger to John Rallo, who started his business career in his family’s construction company, which allegedly had ties to Chicago organized crime, according to FBI records.  Rallo, a co-defendant who was also found guilty in the Stenger case, benefited from contracts funneled through the St. Louis Economic Development Partnership then headed by Sheila Sweeney, an associate of Webbe. Sweeney received probation. Webbe, was not charged.

The money was siphoned from the $5 million in annual rent payments made to the St. Louis County Port Authority by the River City Casino, which is owned by Penn National, a Pennsylvania-based gaming corporation.

This was not Webbe’s first rodeo. The former city alderman had been convicted of voter fraud and obstruction of justice in 1985. His bust followed the conviction of his father for income tax evasion in Nevada in 1983. The IRS case against Sorkis Webbe Sr. related to his interests in the Aladdin Casino in Las Vegas, which was then controlled by the Detroit Mafia.

Documents released by the FBI under the Freedom of Information Act in October 2020 show Webbe Jr. and his late father were embroiled in a power struggle with St. Louis Mafia leader Matthew Trupiano and the Detroit Mafia in 1982. The conflict developed because the Detroit mobsters and Trupiano were leaning on Webbe Sr. to cut them in on the skim from a casino in the Bahamas, according to the FBI. The Detroit Mafia believed that Webbe Sr. had ripped them off in the Aladdin casino deal in Las Vegas and wanted to be repaid through sharing in the ill-gotten gains from the Bahamanian gambling operation, according to the FBI.

Though the FBI records were released only last month, details of the rift between the Webbes and Trupiano had already been reported decades ago by the Post-Dispatch — but that background information was inexplicably omitted from the newspaper’s coverage of Webbe Jr.’s part in the Stenger affair. 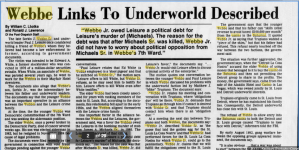 In the July 10 and July 11, 1985 editions of the Post-Dispatch, staff reporters  Ronald J. Lawrence and William C. Lhotka revealed the details of the Webbes’ conflict with Trupiano and his allies in Detroit.

The two stories reported that in the early 1980s, Webbe Jr. acted as an envoy for his father in negotiations with Trupiano, the St. Louis mafia leader, who was related to members of the Detroit Mafia through his uncle, the late Anthony “Tony G” Giordano, the prior boss of the St. Louis Mafia.  After Webbe Sr. and Trupiano failed to reach an agreement on sharing the estimated $100,000 per month skim from the Bahamian casino, the Webbes sought protection from St. Louis Syrian crime boss Paul J. Leisure. 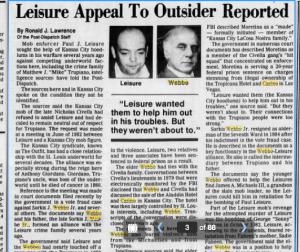 The Leisure family was then in a gang war with loyalists of  the late Southside Syrian syndicate boss  Jimmy Michaels, who had been murdered in a car bombing on Interstate 55 in South St. Louis County by the Leisure gang in September 1980. The unrest in the St. Louis underworld had been spurred by the earlier, natural death of Giorando, who had forged a pact with both Michaels and East Side rackets boss Art Berne, who represented the interests of the Chicago outfit.

During this period, Paul J. Leisure reached out for support from the Kansas City Mafia then headed by the Civella crime family. The Civellas refused to intervene in the dispute with Trupiano, according to FBI sources cited by the Post-Dispatch in 1985. The Detroit Mafia also declined to declare war on the Leisures, thereby averting further violence

Paul J. Leisure lost his legs in a retaliatory car bombing carried out by the Michaels gang in August 1981. He was sentenced to 55 years in prison in 1985 for the car-bombing death of Michaels and died at the federal prison hospital in Springfield, Mo. in 2000.

In his bid to privatize the St. Louis airport, billionaire Rex Sinquefield jumped in bed with a consultant with mob ties, according to the feds.

Jeff Aboussie, a consultant connected to billionaire Rex Sinquefield’s scheme to privatize Lambert International Airport, has Mafia ties dating back to the 1980s, STLReporter has learned. 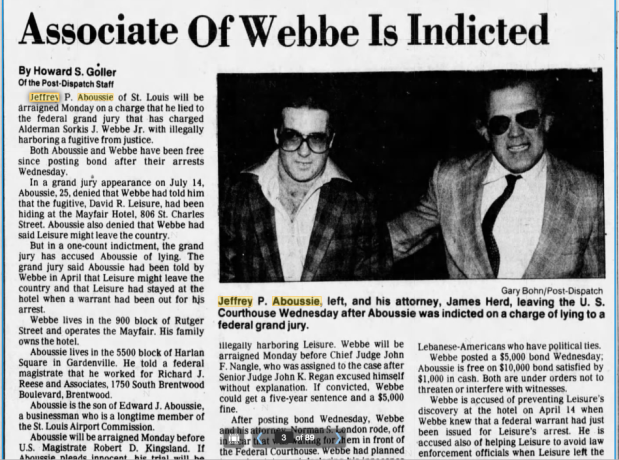 The  information is contained in an Eighth Circuit Court of Appeals ruling and is based on an FBI wiretap that captured conversations in which Aboussie discussed efforts to track down a rival gang member during a protracted turf war between competing factions of the St. Louis underworld in the early 1980s. The background in the appeals court decision names Aboussie as being “associated with a Kansas City, Missouri organized crime family.“ The appeals court ruling goes on to say that Aboussie provided support to one side of the gang war by “contacting the Denver and Chicago crime families.”

Aboussie, who now resides in the affluent suburban town of Wildwood, is the former head of the St. Louis Building and Constructions Trades Council. Prior to heading the council, he was affiliated with Operating Engineers Union Local 513. Aboussie resigned from the St. Louis Airport Commission in 2016 to form Regional Strategies, a consulting firm connected to Grow Missouri,  the non-profit corporation formed by Sinquefield to push the billionaire’s plan to privatize the city-owned airport. Aboussie was appointed to the commission by former St. Louis County Executive Steve Stenger in 2015. Stenger resigned last month and pleaded guilty to federal corruption charges.

Webbe — Aboussie’s past partner in crime —  played a pivotal role in the federal sting that ultimately brought down Stenger, introducing the politician to shady businessman John Rallo and also attending a meeting with Stenger and St. Louis Economic Development Partnership CEO Sheila Sweeney. Stenger and Sweeney pleaded guilty earlier this month for their roles in the pay-to-play scheme. Rallo later changed his decision andpleaded guilty to the same charges. Webbe was not charged.

In 1983, Webbe and Aboussie were implicated by the feds in a conspiracy to harbor a fugitive wanted for participating in a series of gangland car-bombings here. The feds indicted Aboussie for lying to a federal grand jury about the plot.

Aboussie later pleaded guilty to insurance fraud in a separate federal criminal case and received a six-month sentence and five years probation. As a part of the same 1985 plea deal, the feds dropped the perjury charges. The full terms of the plea deal remain unknown.

In the current investigation, the U.S. attorney’s office here subpoenaed the personnel records of Lou Aboussie, Jeff Aboussie’s first cousin. Lou Aboussie was hired by Stenger in 2015 at an annual salary of more than $75,000. At the time of his resignation earlier this year, he was listed as working for the County Parks Department, then-headed by Gary Bess, another Stenger appointee who also quit in the shakeup of County government that took place in the wake of the federal indictments of Stenger and his accomplices. Lou Aboussie was formerly an aide to U.S . Rep. Lacy Clay.

A long-buried FBI report raises questions as to why the FBI and U.S. Justice Department ignored damning allegations by a now-very dead informant. 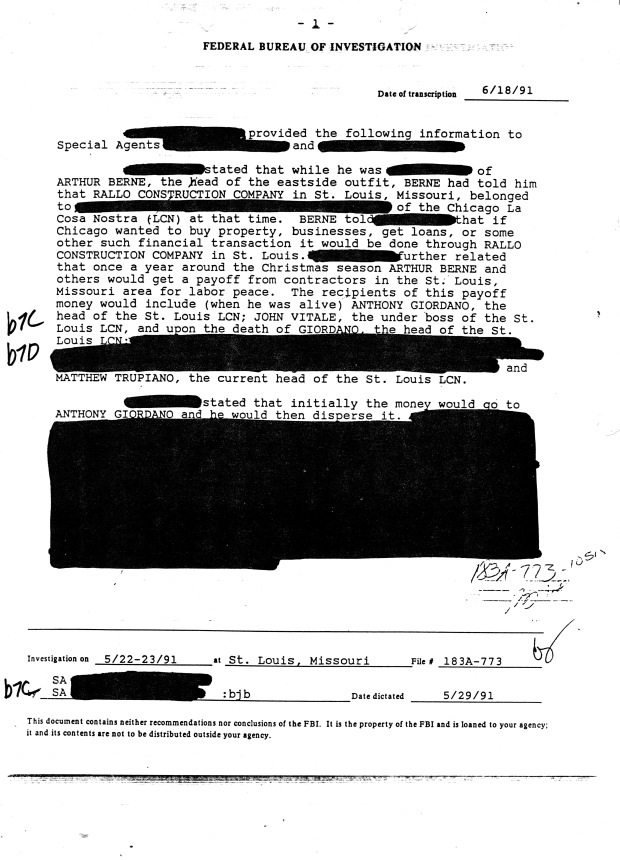 The FBI knew that the Rallo Construction Co. had alleged ties to the Chicago Mafia for decades. In indictments filed by the U.S. Attorney for the Eastern District of Missouri against St. Louis County Executive Steve Stenger on April 25, 2019, John “Johnny Roller” Rallo was named as a participant in a pay-to-play scheme. He is scheduled to be arraigned May 10.

The FBI knew about an alleged connection between the Chicago Mafia and Rallo Construction Co. of St. Louis as early as 1991, according to a classified FBI report released under the Freedom of Information Act.

Jesse Stoneking, the unnamed informant cited by the FBI in the report, died of a gunshot wound to the head in Arizona in 2003. Arizona law enforcement authorities ruled his death a suicide. Stoneking had been a top lieutenant of East St. Louis racketeer Art Berne in the 1980s, when he was working undercover for the FBI.  After he testified against Berne and other St. Louis area organized crime figures in federal court, the Chicago Mafia allegedly put out a $100,000 contract on his life. 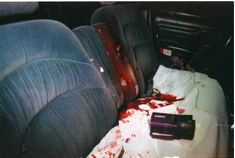 Case Closed: Crime scene photo of the interior of the 1995 Ford Crown Victoria occupied by Jesse Stoneking on Jan. 19, 2003. The St. Louis mobster and federal informant died from a gunshot wound to the head. Arizona authorities ruled it a suicide.

Last month, the U.S. Attorney’s Office in St. Louis  issued a three-count indictment against St. Louis County Executive Steve Stenger for his role in steering lucrative contracts and property deals in return for campaign contributions from John G. Rallo, a former shareholder in one of the family-owned construction companies — CMR Construction Inc. CMR was formed 1989 by Charles N. Rallo and Michael J. Rallo, grandsons of the of founder of C. Rallo Contracting Co., which was incorporated in 1947.

John G. Rallo, also known as “Johnny Roller” for his long hours spent at the crap tables in Las Vegas, and fellow accomplice Sheila Sweeney were charged one week after Stenger  pleaded guilty. He is awaiting sentencing before Judge Catherine D. Perry in August. Until January, Sweeney headed the St. Louis Economic Development Partnership, a county agency that was used to dole out the contracts to Rallo and other political contributors to Stenger’s campaign coffers.

In May 1991, Stoneking informed the FBI that “Berne had told him that the Rallo Construction Company … belonged to the Chicago La Costa Nostra. …” The report goes on to say that “Berne told [Stoneking] that if Chicago wanted to buy property, businesses, get loans or some other such financial transaction it would be done through Rallo Construction Company in St. Louis.”

Stenger was introduced to Rallo by federal felon Sorkis Webbe Jr. in 2014, according to the federal indictment. Webbe, a former city alderman, was convicted of voter fraud and obstruction of justice in 1985.  Webbe’s father had been convicted of income tax evasion in Nevada in 1983 related to his interests in the Aladdin Casino in Las Vegas, which was then controlled by the Detroit Mafia. The Detroit and St. Louis Mafia families are related.

Given this evidence and other indictors, it is unclear why federal prosecutors in St. Louis did not now pursue the Stenger case under the Racketeer Influenced and Corrupt Organizations Act (RICO), which was crafted specifically to address such criminal enterprises.

Hal Goldsmith, the prosecutor in the Stenger case, previously served as an Assistant U.S. attorney in East St. Louis in the 1990s, which was Berne’s territory. Goldsmith’s boss at that time was then-U.S. Attorney Charles Grace, who initiated wide-ranging probes of organized criminal enterprises during his tenure. When Berne died in 1996, he was a paid “security consultant” for Pipefitter’s Local 562, which Stoneking had also fingered as being connected to the Chicago Outfit. James O’Mara, the manager of Local 562, was the chairman of the St. Louis County Council at this time. 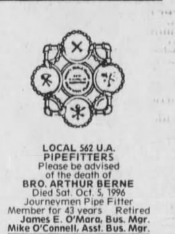