The origins of modern propaganda, which continues to support America’s endless wars, dates back to World War I and is joined at the hip with the creation of the public relations industry. 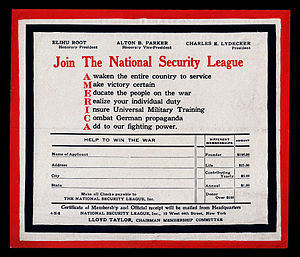 “The Road to Baghdad,” one of many titles on display in the downtown Mercantile Library’s reading room, doesn’t chronicle the latest military conflict. Instead, this example of yellowing journalism — part of an exhibit called “Words at War” — details the Turkish conquest during World War I.

One of David Cassens’ first duties after becoming a curator ot the Mercantile five years ago was creating an annotated catalog of World War I ephemera. Included are 394 propaganda titles from the era, many with anti-German views expressed by the British, French and eventually American propagandists.

“These pamphlets were sent to libraries, churches, schools, private individuals, even Rotary Clubs,” says Cassens. The intent was to sway American public opinion, he says. Ultimately, the campaign succeeded.

Like all good propaganda, the tracts contained elements of truth, says Cassens: “Unrestricted submarine warfare, the destruction of historic towns and the deportation of civilian populations to Germany to work on the labor force — these are all things did happen.” Germany’s ally, Turkey was also responsible for the first modern holocaust: the murder of about 1.5 million Armenians, says Cassens.

Despite all of this, before the Unites States joined in the allied effort, many influential members of the large German-American community in St. Louis argued for neutrality. Former library staffers recall German patrons objected to the material, Cassens says. So most of it was discreetly shelved and went unread.

Ignoring wartime hysteria didn’t make it go away. Germans were being stereotyped in the European propaganda as barbarous Huns. As the United States became drawn into the conflict, anti-German propaganda began to flourish here as well. One pamphlet, part of a “Patriotism Through Educations Series” issued by the National Security League, was called “The Tentacles of the German Octopus in America.” Written by a librarian and professor of history at the University of Syracuse University, it warned about German schools, churches, cultural societies and newspapers.

Another pamphlet, published by the U.S. government in cooperation with the St. Louis Republic, a daily newspaper, attributed all wartime rumors to German spies. The tract, titled “The Kaiserite in America: One Hundred and One German Lies,” implored traveling salesmen to report the identities of gossipmongers to the Committee on Public Information in Washington, D.C.

“You have met him, Mr. Commerical Traveler, … The agents of the Imperial German Government are busily spreading throughout the country all sorts of poisonous lies and disquieting rumors and insidious criticisms of the Government and its war-work. And in no place have they been busier than in tyhe Pullman smoking cars and the hotel lobbies.”

Mass paranoia bore its consequences. Cassens’ own great-grandparents, who immigrated from Germany, lived in Galanbeck, Ill. During the war, he says, the town’s name was changed to Hamel.

Assimilation had become a matter of survival for millions of German-Americans. Many were forced to kiss the American flag or sing the national anthem as a demonstration of allegiance. Those who chose to retain their ethnic identities or expressed divergent poliital views risked intimidation, jaile and even death. Armed guards patrolled the entrance to the nearby German settlement of Maeystown, Ill. for a brief time during World War I, says local historian Gloria Bundy. The sentries were posted in response to vigilantes from Williamson County whbo had threatened to abduct the Rev. Paul Schultz, the town’s minister for conducting services in German.

In St. Louis, Charles H. Weisberg, head of the German American Alliance in Missouri, was indicted on charges of violating the newly enacted Espionage Act for allegedly making disloyal remarks to two St. Louis Post-Dispatch reporters. Although he was later acquitted, Weisberg’s organization dissolved because of the war hysteria.

The most tragic result of doughboy jingoism came just after midnight on April 5, 1918, when a drunken Collinsville, Ill. mob lynched Robert Paul Prager, a German immigrant and socialist whom they suspected of being a spy.