When two Pentagon bosses showed up to grab a chunk of the city back in December, the St. Louis Post-Dispatch discretely chose not to mention them or the new military landlord on the Northside. 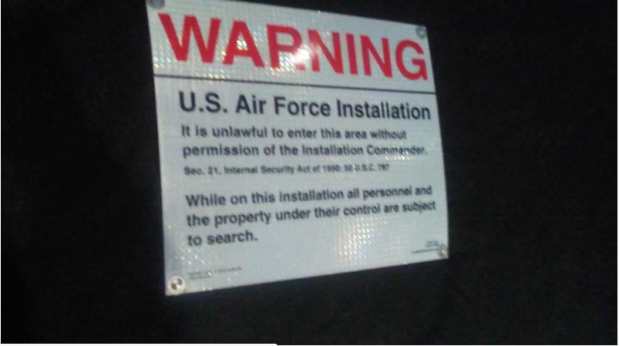 Better Dead than Red: Warning sign at 23rd and Cass cites the Internal Security Act of 1950.

The sign cautions visitors they are not welcome to enter without the permission of the “Installation Commander.” Bold letters above the warning identify the site as a U.S. Air Force installation. The advisory is posted on a locked gate at 23rd and Cass in North St. Louis, one of the entry points to the 97-acre development site of the planned National Geospatial Intelligence Agency headquarters.

The city, which spent $100 million in taxpayers funds to prepare the property, gave it away to the Air Force back on December 13 at a ceremony held at the St. Louis Public Library’s main branch. But readers of the St. Louis Post-Dispatch were not informed of the identity of the new landlord in the story by reporter Jacob Barker the next day. Nor were newspaper readers informed of two high-ranking military officials who attended the event.

One of the unmentioned officials in the Post story, was Assistant Secretary of Defense Robert H. McMahon, who gave a speech to the 300 people in attendance. The other Pentagon speaker the newspaper forgot about was Deputy Assistant Secretary of the Air Force Richard K. Hartley, a former CIA operative detached to the National Reconnaissance Office from 1997 to 2003.

In their comments, the two officials thanked St. Louisans  for their generosity, and alluded to the Air Force being happy to be “embedded” in St. Louis. Both military officials were applauded and warmly received by the audience. All the invited local dignities heaped praise on the cooperative spirit that was necessary to entice the spy agency to locate on the Northside. None hinted that it could be dangerous to locate a high-value enemy target in the middle of a densely populated urban area, nor did the Post story elude to this possible risk.

The warning sign on the gate of St. Louis’ new Air Force Installation prohibits entry to the site, citing the Internal Security Act of 1950, otherwise known as the Subversive Activities Control Act. President Harry Truman vetoed  that bill in September 1950, sending it back to Congress with a blistering message in which he slammed the legislation as “the greatest danger to freedom of speech, press, and assembly since the Alien and Sedition Laws of 1798,” a “mockery of the Bill of Rights” and a “long step toward totalitarianism.” Influenced by the anti-communist hysteria of McCarthy Era, the House overwhelming overturned Truman’s veto.

St. Louis is now a garrison city. Its citizens paid for the privilege of being occupied.