The St. Louis alternative weekly newspaper that prides itself for being progressive has bedded down with a Wall Street sugar daddy and a Pentagon contractor. 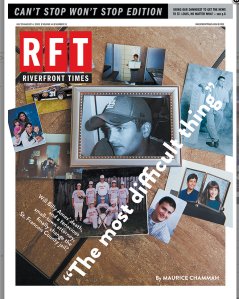 The July 29 edition of the Riverfront Times featured a cover story that focused on the wrongful death of a young man in a rural Missouri jail. It was a well-reported story, and it had all the hallmarks of the kind of advocacy journalism that the newspaper has supported since its inception.  But there was one difference.

The RFT did not generate the story.

Instead, the story was commissioned by the Marshall Project, a non-profit corporation founded by former Wall Street hedge fund tycoon Neil Barsky. After Barsky’s shaky hedge fund empire crashed and burned in 2008, the former Wall Street Journal reporter experienced a life-altering  conversion: He became a social justice crusader, or at least that’s the established narrative.

The Marshall Project, which draws public attention to abuses within the criminal justice system, is bankrolled through the generosity of various wealthy individuals and corporate foundations — that thrive on America’s continued inequities, including the CIA-connected Ford Foundation, George Soros’ Open Society Foundations and Barsky himself.

The Marshall Project’s board of advisors includes philanthropic honchos, silk-stocking lawyers and investment bankers. One advisor, for example, is an exec who works at the Blackstone Group, the financial behemoth that holds a five percent share in Republic Services, the waste hauler that owns the radioactively-contaminated West Lake Landfill in St. Louis County.

Besides the Wall Street largess, the RFT is now accepting at least a small amount of advertising dollars from a Pentagon contractor.

A want ad for RiverTech, an Air Force contractor that has recently set up shop at nearby Scott Air Force Base, appears in the lower left-hand corner of page 7 of the same issue of the Riverfront Times, directly below an advertisement for the online edition of the newspaper itself. The top half of the same page featured a column by Ray Hartmann,  the newspaper’s founder, who cranked out the publication’s first edition in 1977.

RiverTech, an Air Force contractor, is looking for a few good men or women to support its military mission.

Back in those days, taking Pentagon dollars would have been considered a betrayal of the principles of the left-leaning alternative press that was borne out of the tumultuous anti-war movement of the 1960s and the muckraking of the Watergate era.

But times have changed.

RiverTech is a subsidiary of Akima, whose parent corporation is the NANA Regional Corp., which is owned by Alaskan Native Americans. Under Small Business Administration regulations NANA’s subsidiaries are eligible to obtain limitless no-bid federal contracts.

Hartmann, who sold the RFT in 1998, came back last year and began writing a weekly commentary for the latest owners, Euclid Media Group of Cleveland.