A whistleblower defends a colleague and sets the record straight on who pays for whose lunch. 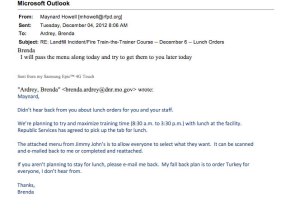 I just read your post titled “Who Says There’s No Such Thing as a Free Lunch?” on WordPress.  While I am flattered by your kind words regarding my work on the Bridgeton Landfill, I wanted to ensure you have a better understanding of the role Brenda Ardrey had regarding this project and explain a bit of background context for the information in your 4th paragraph.

Brenda was one of the most supportive people at DNR that I worked with on this project.  She was truly dedicated to making decisions on the basis of what was in the best interest of the community.  Brenda and I likely had more knowledge of the Bridgeton Landfill than any other staff I worked with.  The two of us both worked extremely long hours in order to do what we believed to be right for the community around Bridgeton.  Brenda was even one of the “Few people within DNR [who] have the fortitude to stand up to the political pressures of the system.” that I was thinking of when I wrote that part of my letter.  Were it not for Brenda’s ability to bring other staff back to reality and common sense, it is very likely that the landfill site may have been officially closed by the DNR.  Casting Brenda in the same light with the political problems I mention in my letter is an unfortunate distortion of reality.

I also wanted to clarify the facts regarding the Jimmy John’s meal you mentioned.  At the time of the December 6, 2012 training, we had meetings with the landfill owner approximately once a month.  In the interest of maximizing the meeting time, we normally ate sandwiches that were delivered to all of us (DNR and landfill owner).  Since meetings between DNR and the landfill owner occurred frequently, the way we handled the payment of these was for DNR to pay for everyone’s sandwiches one month and then the landfill owner would pay for everyone’s sandwiches from the same place the following month.  While at first glance this may appear to be a handout from the landfill owner, it is not.  There was no sort of corruption involving these meals that I was aware of, and this is not an example of the kind of coziness I mentioned in my letter.
I would be most appreciative if you would consider amending your article or adding my comments to it.